In many countries, years of ultralow interest rates coupled with the government stimulus unleashed during the pandemic sent cash flows into riskier investments, like tech stocks and crypto. Now some of those initiatives are winding down, and the potential for inflation to weigh on economic growth has many exploring safer investments than they'd gone for in the past.

Over the years, cryptocurrencies have become a viable way of conducting transactions anytime and anywhere. This is possible through users' ability to transact with each other directly without any intermediaries. Based on the value of their virtual money, cryptocurrencies are also referred to as money. South Africans use cryptocurrencies, but many still don't know much about them. The cryptocurrency space has been left to develop organically in South Africa, with no clear-cut awareness to encourage maximum adoption.

The Merchant Consumer Survey revealed that 53% of South African participants knew little about cryptocurrencies. Interestingly, nearly half of respondents said they would be more open to the cryptocurrency space if local banks offered such services. The report noted a considerable growth opportunity for crypto trading platforms on the African Continent. In South Africa, local exchanges lead the way, in stark contrast to the rest of the continent, where global exchanges lead in market share.

According to the report from Merchant, a global telemarketing firm:

The survey also noted that cryptocurrency adoption in South Africa could be boosted if domestic banks embrace the asset class and offer educational programs to users.

Due to technological advancement, cryptocurrency is being used to a certain extent in South Africa. Businesses can accept and pay their employees using cryptocurrency without affecting their current cash flow. Additionally, some South Africans use cryptocurrency as a hedge against inflation. By purchasing cryptocurrencies when prices are low and selling them when prices rise, users earn more money than they spent on their investments. Through this strategy, they become financially independent from traditional banks that charge high-interest rates on loans.

“There is a real opportunity for banks to get involved in cryptocurrency as it begins to really take off on the continent, rather than waiting until it is more established – by when consumers are likely to have a preferred platform or partner who they have built that trust with.”

Another recent report by Bitget Exchange, Boston Consulting Group, and Foresight Ventures found that South Africa has the continent’s most significant cryptocurrency market, as evidenced by its more advanced financial infrastructure and fiat-to-crypto payment rails. 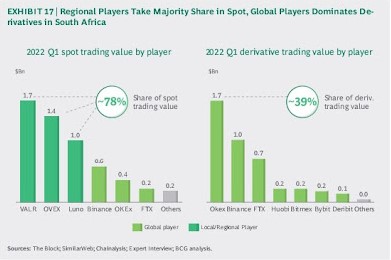 The report noted a considerable growth opportunity for crypto trading platforms on the African Continent.

On-platform exchange services, such as Coinbase and Gemini, have been less competitive in the African market. However, with few existing exchanges offering access to fiat currencies or local payment methods, it might be challenging for them to thrive in that market.

Despite the benefits that cryptocurrencies offer users, including lower transaction fees, increased financial security, and uncomplicated business operations, few people know much about them in South Africa at present. As awareness rises among local users, more will start investing in cryptocurrency and allowing themselves greater economic freedom over time.

Cryptocurrency transactions help to remove the procedural bottlenecks that plague traditional banking and financial services. Fearing a collapse of the banking industry or arbitrary appropriation of money by the government, Africans who live in politically unstable countries could be attracted to cryptocurrency.

Generally, it is expected that there will be an increase in cryptocurrency awareness amongst users in Sub-Saharan Africa over the coming years. This would drive the adoption of cryptocurrencies within the region.