A Step In The Right Direction For The Crypto Industry 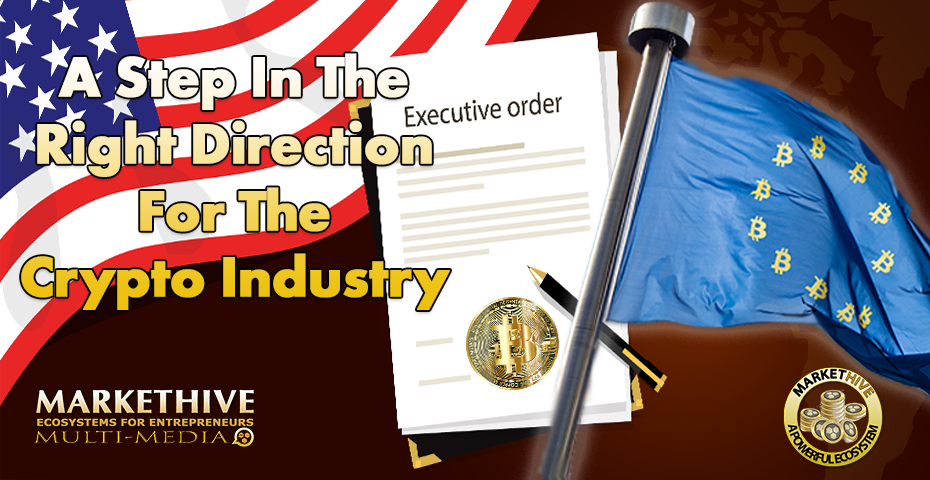 The narrative around BTC is constantly changing. First, BTC was seen as a risk-on asset correlated to the stock market. Then BTC was seen as an inflation hedge similar to gold. Now we’re seeing the narrative of BTC as uncensorable money emerge. So which one is it? Or could it be all three?

This week, we saw that long-awaited Executive Order finally issued. This had many people on the edge of their seats about what could be included, especially in the context of what was happening at the time, such as the Russian sanctions.

However, thanks to an initial leak of a statement from the Treasury, we got a glimpse into the tone it would be taking. An executive order would attempt to foster innovation in the space while maintaining investor protection.

When it was finally issued the day after, many in the space not only breathed a sigh of relief but were also pleasantly surprised. That’s because the tone set the previous day by Janet Yellen’s leaked press release was carried through with the Executive Order.

While there were still concerns about crypto being used for illicit purposes without sufficient oversight, Biden did say the rise of cryptocurrencies was “an opportunity to reinforce American leadership in the global financial system and at the technological frontier.”

There was quite a bit to cover in the EO, but here are some of the essential points:

As Kristin Smith of the Blockchain association said in a recent post, this is a major milestone for the industry in the United States.

“If you are bullish on the long-term possibilities for cryptocurrencies to transform many of the foundational services of our lives, then this recognition by the federal government of crypto's fundamental importance can only be viewed as an affirmation of that position.”

Kristen goes on to say that the crypto industry welcomes open dialogue. The debate is no longer whether crypto will survive; the discussion has shifted to encouraging responsible innovation and how the United States can maintain a leadership position in this innovation.

Kristin Smith is the executive director of the Blockchain Association, the Washington D.C.-based trade association representing the most prominent and reputable organizations in the crypto industry.

In the video, she talks with Coindesk about the outcome of the EO.

What is significant about this Executive Order is that it shows how the attitude and thinking have evolved within the administration. Biden has not been the most pro-crypto individual in the White House by any flight of fancy. Still, even he now realizes the importance of crypto innovation is revealing.

Not so long ago, policymakers typically viewed crypto with confusion, disdain, or apathy. Last year, Congress tried to quietly slip misguided Internal Revenue Service requirements on crypto entities into a bill as a pay-for provision to raise cash for the infrastructure bill. Now, the president of the United States is publicly saying that the federal government must do its due diligence before moving forward with new regulations.

Jerry Brito of CoinCenter also said that the Executive Order shows that the Federal government recognizes cryptocurrency as a “legitimate, serious, and important part of the economy and society, and I think it’s a good signal to serious people who’ve been holding back from getting involved.”

It’s in no small part thanks to individuals like Kristin and Jerry and their organizations who have been standing up for the industry in Washington. From the big battles over the infrastructure bill provision last year to this relatively positive Executive Order.

There are, of course, also those pro-crypto politicians who have been standing up for the industry since last year. These include the likes of Tom Emmer, Pat Toomey, and Cynthia Lummis, to name but a few.

While this is a victory for the crypto industry, there is still work to be done. There are still anti-crypto zealots who seek to hinder the industry’s progress, and there are still countries that have yet to appreciate this technology's value.

The recent historical events exposed to the mainstream, such as Canada’s tyrannical move to block payments and withhold bank accounts of the people fighting for their rights and crypto donations to war-torn Ukraine, show the world that crypto has a real purpose and really is unstoppable.

One More Positive Outcome For Crypto

Meanwhile, in other parts of the world, it was reported that the EU Parliament committee voted against a ban on the Proof-of-Work mechanism underlying popular cryptocurrencies like Bitcoin.

A proposal put forward by the EU’s Economic Monetary Affairs Committee failed to win approval that would have effectively banned the mining and transactions of energy-intensive cryptocurrencies such as Bitcoin.

The topic of crypto energy consumption has been a controversial and spirited debate, especially with the growing demand for Bitcoin and other cryptos in this ever-expanding sector. As cited in this report, the crypto industry adopted the move to renewable energy and will continue to do so. Bitcoin will become 100% renewable when all other sectors become 100% renewable.

Some would argue there seems to be no credence to this proposal other than an anti-crypto sentiment by those who voted for it. (Pictured below) A final tally of the committee’s voting showed the proposed clause was defeated with 23 votes in favor, 30 against, and six abstentions. 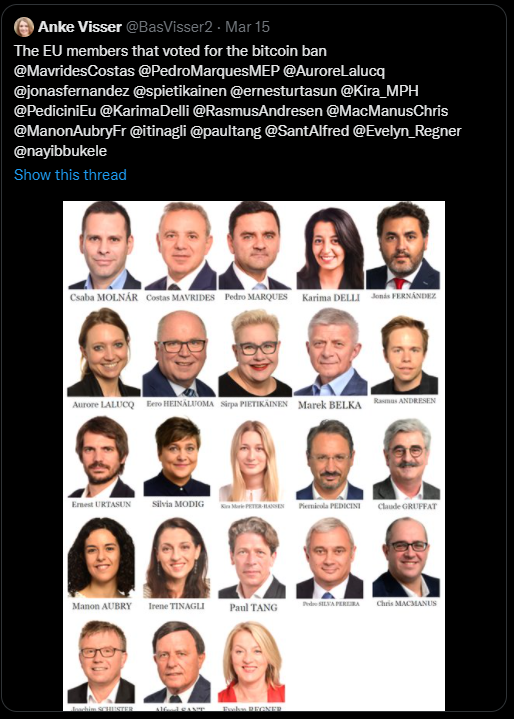 Markus Ferber, a lawmaker and the spokesman for the  Europe People’s Party (EPP) in the committee, said the failed proposal sent a “clear signal” that the EU wishes to support the crypto industry as it grows.

“Banning ‘proof of work’ would have meant for the EU to become crypto no man’s land,”  If we want to foster innovation, we should be open to new technologies, not banning them.”

“Let It Be” For The Sake Of Humanity

In the 1990s, a novel technology called the internet was catching on and growing fast, so regulators suddenly had to grapple with how to address it. Ultimately, Congress passed legislation that provided clear rules and necessary protections.

The move gave technology companies the breathing room to create better products, and the evolution of the various systems in technology is something we’ve never seen before. If Congress considers the same for crypto as it did for the internet, then we could see a similar explosion of innovation.

That innovation could have a positive impact on communities. Crypto technology has the power to provide financial services to the unbanked and underbanked, give individuals control over their finances, make data storage secure, private, and autonomous. It can create sovereign ecosystems to uphold freedom, liberty, and financial sovereignty for all the right reasons.