US congressmen wrote Zuckerberg a letter to take action in Slovakia against supporters of Putin and Russia on Facebook
US Congress decides who should be deleted and blocked on social networks in Slovakia ?

Today, American congressmen are already writing public letters and intervening against the internal affairs of another "sovereign" country.

A total of 5 members of the US House of Representatives Intelligence committee, headed by committee chairman Adam B. Schiffem wrote an open letter  to Facebook chief Mark Zuckerberg to crack down on Slovak citizens who glorify Russia, Vladimir Putin and spread alleged Russian disinformation on his social network. It is said to pose a huge threat to the security of the US and its allies.

In the letter, five Democratic Party congressmen call on Zuckerberg to increase the number of Censors in Slovakia, that is, in their words, “fact checkers” for verifying and deleting Russian disinformation and posts that express sympathy for Russia, Russian officials, the Russian army, etc.and also to launch an investigation into who publishes this information on Facebook .
These congressmen are Adam B. Schiff
Mike Quigley
Peter Welch
Sean Patrick Maloney
Jason Crow 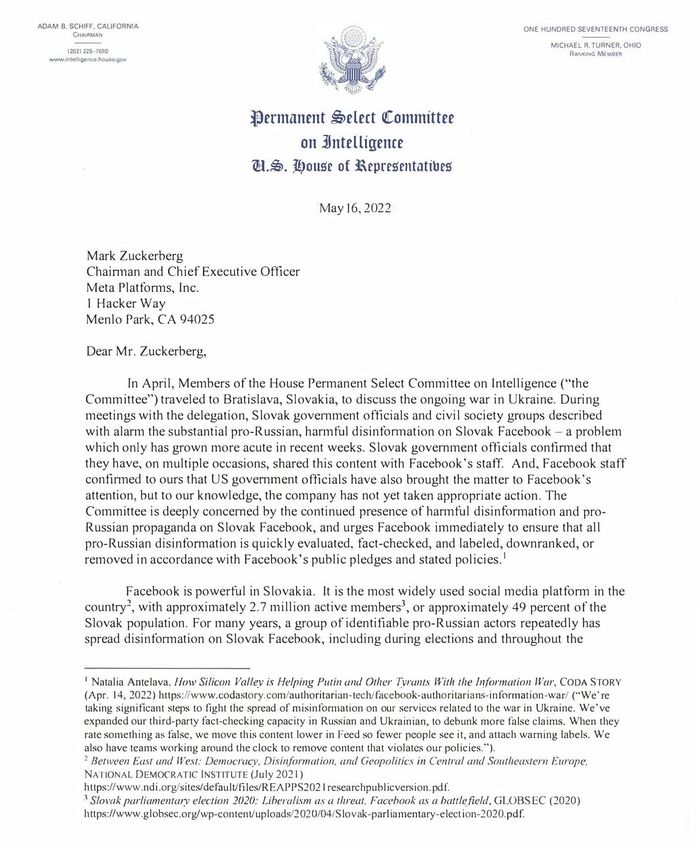 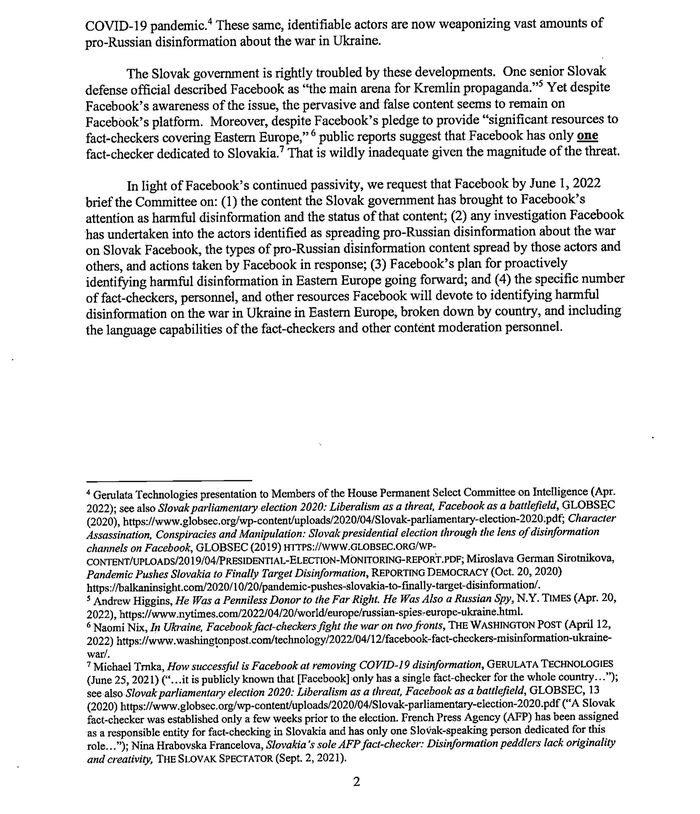 Slovakia is officially an American colony with everything ? The civil rights of Slovaks to opinions on Facebook are controlled by US congressmen…. And the prime minister of Slovakia Eduard Heger still thanks them? Is this normal?

Slovak prime minister Eduard Heger  already sent his thanks to US congressmen also saying that this is result of a common truth-seeking effort and wrote also "It is highest time for as many people as possible to be clear about the values and to be able to navigate correctly in the complexities of the contemporary world."

Member of Slovak parliament Luboš Blaha from political party SMER has already responded to the intervention and wrote  an open counter-letter to Zuckerberg. 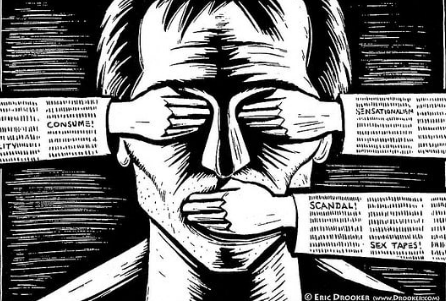 Yes, it is obvious that Americans are afraid of massive anti-American sentiments in Slovakia among the ordinary population. Anti-American signs are beginning to appear, according to our information, everywhere, in all cities, and the police do not have time to blur the letters " Z " appearing in hundreds of cases. It is something like a form of” Zorro Avenger " protest against censorship and against American aggression in Ukraine, against the American nationalization of political and media processes, against the deployment of American occupation forces in Slovakia with the assistance of the government, which part of the Slovak public and especially the opposition calls treasonous.
Facebook is powerful in Slovakia. It is the most used social media platform in the country, with approximately 2.7 million active members, which is approximately 49% of the Slovak population.

Slovakia is very important for the US Congress from the logistical point of view of supplying weapons to Ukraine. It is a country that shares a border with Ukraine, and this makes Slovakia an extremely important vassal for the United States, so important that the US Congress is straining to eliminate resistance and opposition in Slovakia, including the criminalization of representatives of the strongest opposition party.

I would love to show you my #listing at 14382 FORT WORTH CIRCLE #PortCharlotte #FL #realestate https://tour.corelistingmachine.com/home/ALZTKW