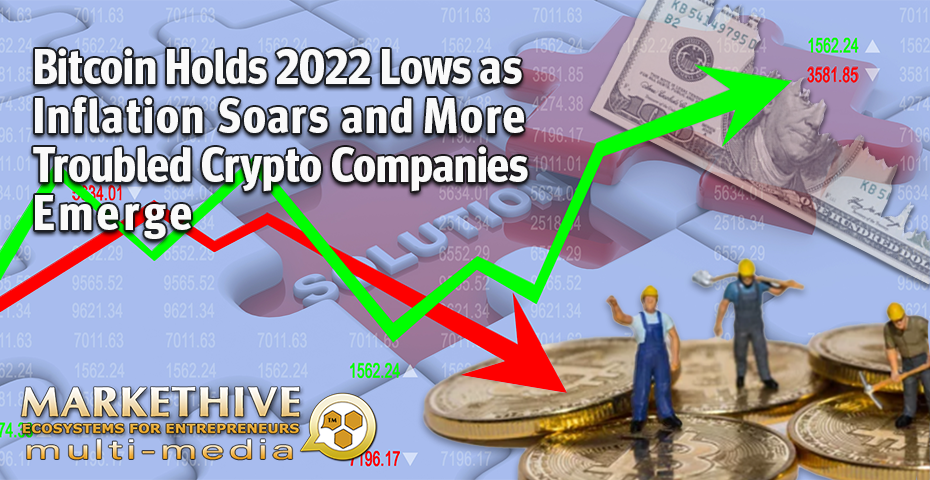 Another month, another red-hot inflation data. As of Wednesday 13th, July, the consumer price index (CPI, a key measure of U.S. inflation) was up 9.1% from a year earlier. Meaning shoppers are paying significantly more for everything from groceries, gasoline and rent. The higher-than-expected reading immediately spooked cryptocurrencies and stocks, as Bitcoin plunged 5% and the S&P 500 opened by 1%. The liquidity crisis plaguing crypto firms; Three Arrows Capital and Celsius continued to spread across the market. Well, it hasn't been all bad news for the crypto sector. Let's dive into the water.

Four decades of high inflation and the Fed's efforts to combat it are weighing on stocks and crypto markets and sparking fears of a recession. Consumer prices rose 9.1% in June from a year earlier, beating Dow Jones's 8.8% forecast. The most significant inversion of the yield curve between 10-year and 2-year Treasury bills (a key indicator of a recession) occurred since 2000. The latest inflation report could mean another rate hike is on the horizon for the Federal Reserve, which has accelerated efforts to unwind pandemic-era stimulus. Riskier assets such as cryptocurrencies and tech stocks have benefited from excess consumer cash in the past, but have since suffered some of the sharpest losses.

Two months after the Terra/Luna debacle, liquidity and credit issues continue to plague overstretched crypto firms like Three Arrows Capital (3AC), Celsius, Voyager, and more. A legal battle has erupted between the founders and liquidators of 3AC, which manages $10 billion, after it filed for bankruptcy on July 1.

The fallout from 3AC affects Blockchain.com. (3AC lost $270 million on loans), Voyager Digital (filed for bankruptcy after 3AC failed to repay $670 million), and BlockFi. FTX CEO Sam Bankman-Fried has since "bailed out" the latter two. Meanwhile, Celsius, one of the first companies to suspend withdrawals due to liquidity issues paid off a huge Defi loan ahead of its bankruptcy filing Wednesday night.

Despite the fall in cryptocurrency prices, global mining output has remained near all-time highs over the past month. Meaning mining energy costs are high even as the value of cryptocurrency block rewards falls. As a result, some miners are selling their cryptocurrency to pay fees.

Regarding global adoption, Italy subsidizes Internet blockchain projects with $46 million. The Central African Republic has announced a new national cryptocurrency, Sango Coin, whose president says it will be "a gateway to the country's natural resources." portal." Meanwhile, $5.5 billion in venture capital flowed into crypto projects in the year's first half. Most recently, Axie Infinity developer Sky Mavis raised $150 million for blockchain gaming, and Layer 1 protocol Rubix raised $100 million from a company specializing in cross-border transactions.

It's also important to note that Ethereum successfully launched proof-of-stake on its Sepolia test net, the second of three milestones ahead of a blockchain energy-efficient upgrade known as Merge.

Months into the crypto winter of Bitcoin's 70% drop from its November all-time high, a big question is permeating: Are we near a bottom? While some analysts claim that macro factors are crucial like the Fed slowing rate hikes or cutting stock earnings forecasts, others think we're close to a bottom. While no one can predict how the crypto market will move, finding a bottom is more than just price levels. As one cryptocurrency trader told CoinDesk:

"The bottom is as much a product of time as the price…Cynical sentiment must die down and give way to optimism."

The price of crypto has been steadily declining since the beginning of the year. This is a common market trend and seems to be generally accepted. The fall in price is not only concerning for those who invested a considerable amount of money in crypto, but it also affects people who are just curious about it. Although the fall in price may be seen as a negative trend, it also has its own set of benefits.