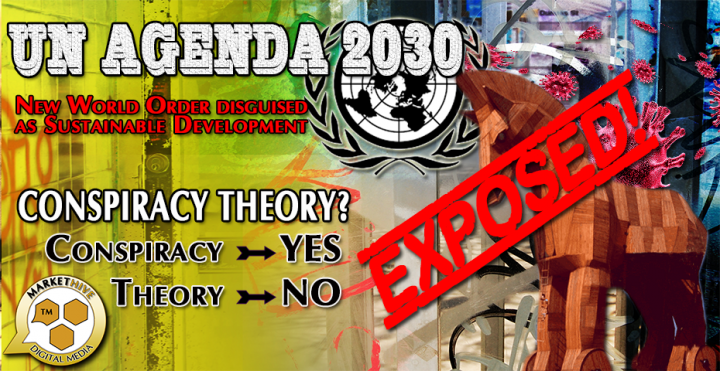 There has been a plan for decades that is resurfacing and now needs to be understood by everyone on this planet as we are all part of the plan and have been subject to a very different way of living with the onset of COVID 19 that has turned the world on its head in every way imaginable.

COVID is a politicized virus allowing political exploitation and subjugation. It’s the trojan horse that has set “the great reset” in motion. The World Economic Forum (WEF) held in Davos, Switzerland, is where the movers and shakers of the world have been meeting on a regular basis. The forum is widely known as an opportunity for the world’s richest and most influential people to discuss pressing political, socio-economic, and environmental challenges.

These summits lead by Klaus Schwab, the founder, and chairman of WEF, with many of the world’s most powerful people, including George Soros, Bill Gates, Al Gore, and the Secretary-General of the United Nations, Antonio Guterres are only too eager to admit that COVID offers them a rare opportunity to reset the world economy, population control, global commerce, climate change regulation, education, and the UN Sustainable Development Goals (Agenda 21/2030) in order to “reorder,” “reimagine” and fundamentally transform every aspect of life as we know it. 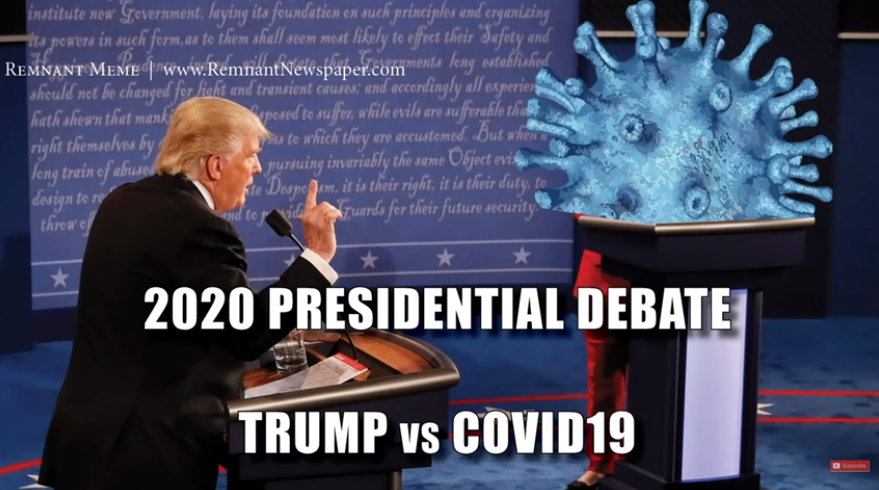 Essentially these people want a new world order, more specifically a one-world government, and the only thing standing in their way at the moment is the United States since it withdrew from the UNHRC and UNESCO in 2017/18, with Nikki Haley, the US envoy to the UN saying it was a "hypocritical" body that "makes a mockery of human rights". President Trump also more recently made waves by formally beginning U.S. withdrawal from the World Health Organization (WHO), criticizing its Covid19 response.

If they get their “new normal”, nothing will be the same ever again…unless, perhaps, if Donald Trump wins the Presidency once more in November. Although the UN does have the support and commitment of the Bill Gates Foundation to help finance this subjugation and imposition of fascism, the UN needs contender Joe Biden to win the election so he can hand over the US to make their dream of a totalitarian world a reality as explained in this video below by the passionate host and editor Michael Matt who shares his views of what’s really happening.

Since the recording of the above video, the Davos 2021 Summit that was to be held in January 2021 to plan ‘The Great Reset’, has now been postponed till the summer of 2021 as it is still deemed unsafe for the elite to travel there in their private jets due to the pandemic. In place of the forum, the WEF will broadcast a series of “Davos Dialogues”, including speeches and panel discussions featuring world leaders, thought leaders, and business executives, beginning on 25 January 2021.

It will also hold its Sustainable Development Impact Summit as planned in September, although it will be online.

What Is The UN Agenda 21

One of the most vitally important issues of our age is the United Nations Agenda 21 for Sustainable Development. On the surface, this tenet can be perceived as being a great humanitarian plan to look after our planet and the population within it, however, it’s not. It’s about moving populations into concentrated city centers and clearing them out of the rural areas.

Rosa Koire, the executive director of the Post Sustainability Institute and an expert in the field of land use and land valuation, had a career of 28 years as a legal witness for the California Dept. of Transportation, evaluating properties for the US government so it could acquire properties for road projects. After realizing that it was very difficult to evaluate properties due to usage restrictions that had been imposed on property owners on a national and even global level, she delved deeper and found the Agenda 21 Sustainable Development plan.

Once Rosa Koire became aware of Agenda 21 she initiated a project to bring awareness, educate and expose the true nature of this globalist scheme, hence the Post Sustainability Institute was born. There is an island of sanity in a world of madness that has woken to the fact that Agenda 21 is the action plan, the blueprint to inventory and control all land, all water, all food, all minerals, all plants, all animals, all construction, all means of production, all energy, all education, all information, and all human beings in the world.

This is all about the economic, social, political, and environmental impacts of communitarianism on the world. We generally think of community as a positive thing and believe that an individual's rights should be balanced with the rights of the community, but in reality, the community is constructed of non-governmental organizations, corporations, and governments in order to dictate and regulate all facets of existence in the world.

We as individuals have no influence on anything they decide unless we are in agreement with it or if we dissent against communitarian law or social tactics we are rejected. What is happening now is regionalization in certain areas and according to Koire regionalization is the stepping stone to globalization and globalization is the standardization of all systems including water, law enforcement, education, and energy.

All systems across the world need to be in harmony or synchronized in order to control them centrally and the goal of Agenda 21 is a one-world government that will allow total control from a central unit. This is a global plan but is being implemented locally and incrementally, so subtly and made so attractive,  most won’t even realize what’s fundamentally happening.

The video below was recorded back in 2013, way before the Trojan horse of COVID, Rosa Koire explains in more detail the ultimate goals and repercussions of this totalitarian regime and her plans to intervene and stop it on a regional level.

The bottom line is we need to educate ourselves, the people around us, the real community. All of us have a responsibility to ourselves and others as this is what a true community is and does. We work together for our personal freedom and even though we work as a group we are all individuals in those groups and we answer only to ourselves.

The judgment underlying sustainable development is that humankind is already damned by and guilty of social, economic, and climate conditions that are irretrievable and that there are too many people living on earth for the resources available to them in their specific localities. This is also indicated on the Georgia Guidestones erected back in 1980 by an anonymous group, and to this day, the true owners and financial backers have not been publicly disclosed. I will delve more into this in another article.

So according to this opinion, of the UN pundits, large populations of impoverished, third-world citizens must be moved to first-world and second-world countries to equal opportunity for everyone. By their reckoning, they say this will solve global poverty.

Aaron Dykes and Melissa Melton Dykes the creators TruthstreamMedia.com have translated the 17 goals as they could be a  little difficult to decipher for us laypersons.

Goal 6: Ensure availability and sustainable management of water and sanitation for all.
Translation: Privatize all water sources, don’t forget to add fluoride.

Goal 7: Ensure access to affordable, reliable, sustainable, and modern energy for all.
Translation: Smart grid with smart meters on everything, peak pricing.

Goal 10: Reduce inequality within and among countries.
Translation: Even more regional government bureaucracy.

Goal 14: Conserve and sustainably use the oceans, seas, and marine resources for sustainable development.
Translation: Environmental restrictions, control all oceans including mineral rights from ocean floors.

Goal 16: Promote peaceful and inclusive societies for sustainable development, provide access to justice for all, and build effective, accountable, and inclusive institutions at all levels.
Translation: More UN “peacekeeping” missions, remove the 2nd Amendment in the USA.

Agenda 21 has been cited as a new kind of tyranny that, if not stopped, will surely lead us to a new Dark Ages of pain and misery yet unknown to humankind. Many critics believe that Agenda 2030 is leading the world toward a New World Order with a One World Government.

It’s the United Nations resolution that suggests ways for governments and Non-Government Organizations to promote sustainable development, and is the linchpin in a plot to subjugate humanity under an eco-totalitarian regime.

More people are becoming more aware given that we are in the information age of technology and the internet and with more sovereign media platforms allowing information other than what the oppressors want you to know.

Therefore, it’s up to us to engage critical thinking, educate ourselves and be aware that maybe what mainstream media calls a conspiracy theory debunking any negative press about the UN’s plans and perhaps there is a truth to the underlying, nefarious intentions of the elite few.  We just need to take off the rose-colored glasses and look at the track record of these organizations.

When all said and done authority has no power, it’s only our power that we give to them. However, either through complacency, apathy or even brainwashing from as early as childhood, a simple sequence of imposition and acquiescence is being played out. From the top down on every level there is some form of an imposition to which each of the levels acquiesces. This sequence goes all the way down the pyramid until it gets to the people en masse who have to acquiesce to the few in control at the top. So the whole world is being controlled by a tiny few people.

Live In Fear And They’ve Got You

What if the pandemic runs out of steam after 6 months of lockdown before the globalists can pull the trigger on their sublime new world order, one-world government? They need and want you to be fearful which in turn gives them the control.

The fabrications, contradictions, and ever-changing uncertainty that are endorsed by the authorities and broadcast on mainstream media along with the laws that have been put in place to supposedly protect us from the pandemic are playing havoc with our psyche and whether we realize it or not, have already changed the way we think and approach life.

Even the countries that have had no cases of COVID are economically and psychologically affected. Due to fear these countries will not open their borders, and may even wait for the long-term measure of a vaccine. Meanwhile, businesses are closing rapidly and the whole country suffers.

They're Relying on You to OBEY

There are many forms of humanitarian subjugation that have been in play for years unbeknownst to the masses and now coming to light with more exposure, that up to now has been played down, by the organizations and leaders involved in the creation of Directed Energy Weapons (DEW) and a very diabolical but very real reason for the wildfires on a global scale. That’s a whole other article coming soon.

The point is not to fear but be prudent and discerning with what is happening, do what we can to make others aware, and stand up to outright tyrannical pressures in any way we can. It is true that the only way authoritarian evil will prevail is if we give it our power, succumbing to acquiescence and control. No matter how the elite few sugar coats their so-called humanitarian agendas, let the real truth be known to the masses and know that the hand of GOD is also at play here.