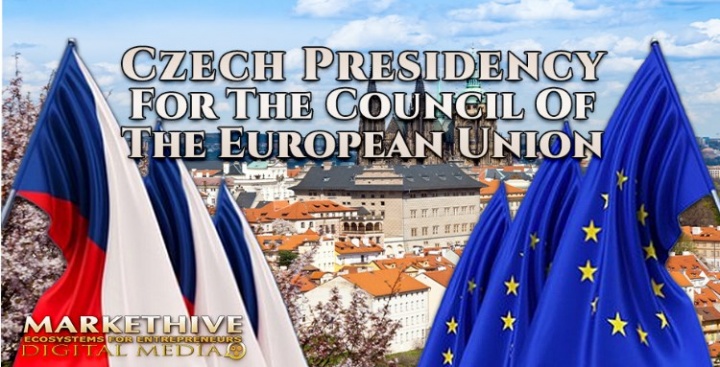 Czech Presidency For The Council of the European Union 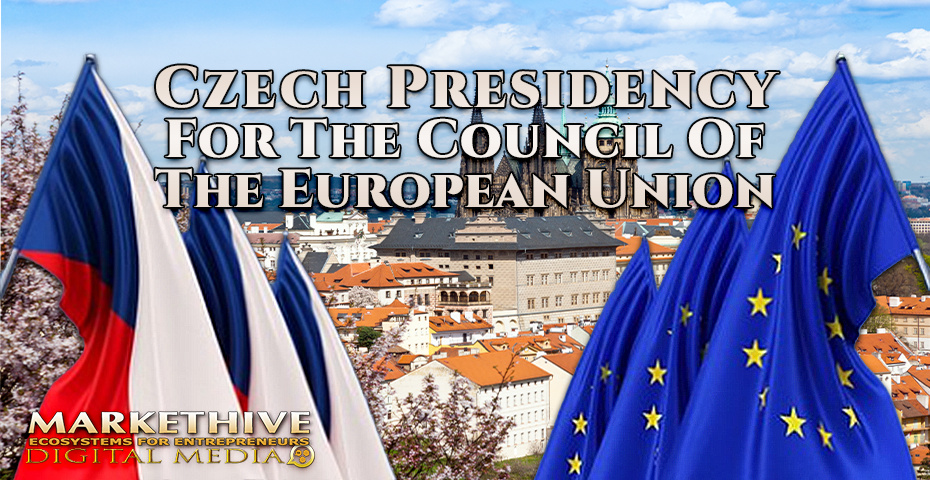 On 1 July 2022, the Czech Republic will take over the Presidency of the Council of the European Union. Its task will be coordinating Member States' actions and seeking acceptable compromises.

Each presidency formulates its own priorities, which it then submits to both the EU Council and the European Parliament. Priorities should reflect not only legislative developments at the European level but also current developments. In addition, the Czech Republic will cooperate with France, which chairs the council in the first half of 2022, and with Sweden, whose presidency will follow the Czech One.

A MODERN AND INTERCONNECTED EUROPE

A GREEN AND SUSTAINABLE EUROPE

A SOCIAL AND JUST EUROPE

The Czech Republic will preside over the Council of the European Union from 1st July to 31st December 2022. The six-month Czech Presidency follows France, which led the Council in the first half of the year, followed by the Swedish Presidency from 1 January till 30 June 2023. Those three states together form the presidency trio and have created a joint program of their presidencies.

During its presidency, the Czech Republic will focus on five closely linked priority areas: 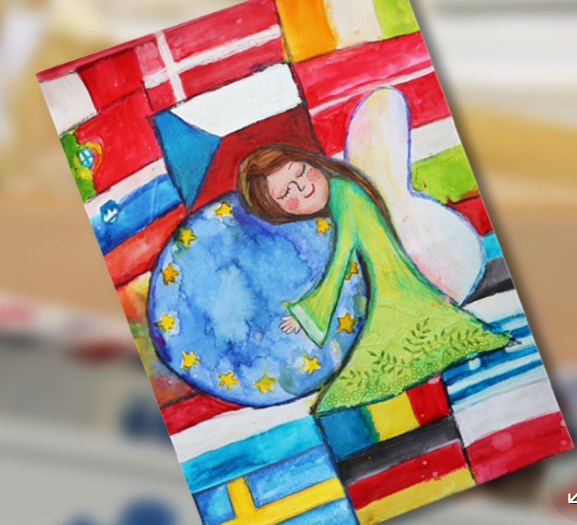 In addition to the official cultural and accompanying program, multiple other events have received the auspices of the Office of the Government of the Czech Republic and the Minister for European Affairs.

However, most presidency events will occur outside Czechia, in Brussels, Strasbourg, and Luxembourg. It will be mainly the so-called Council of Ministers. A number of conferences or informal meetings will take place in the Czech Republic.

The war in Ukraine is forcing the community to reconsider existing plans to reduce greenhouse gas emissions, known as the Green Deal. The Czechia will have to catch up with the key Fit for 55 packages to fulfill the Green Agreement's goals, but under new conditions, when liberation from Russian fossil fuels has become an important goal of the EU.

This primarily addresses the issue of coordinating the storage of raw materials, including sufficient stocks before the winter season and their purchase, and strengthening the infrastructure for the transportation of oil and gas from alternative suppliers. The issue of natural gas, in particular, is very sensitive, as many countries were going to use it during the transitional period.

On the one hand, there is talk of the need to speed up the transition to renewables, but on the other hand, the originally expected date of leaving coal is now being questioned in some countries. A big topic today is also energy savings and a shift away from Russian raw materials.

Moreover, the so-called taxonomy, i.e., the question of including different energy sources among green investments, remains unresolved. Members of the European parliament are trying to reverse the intention to label nuclear and gas in this way. At the same time, Czechia was one of the countries that lobbied to label these sources as green. Energy prices and household aid are also likely to remain a major issue across Europe.

Strategic Resilience of the European Economy

The coronavirus pandemic has already shown that Europe's high dependence on raw materials and key components from Asia can be a major problem at a time when supply chains are nearly collapsing or production in countries of origin is being disrupted.

The war in Ukraine added to the lesson that food self-sufficiency is paramount even in a globalized world. Agricultural resilience is also an essential issue regarding climate change and extreme weather, including drought. 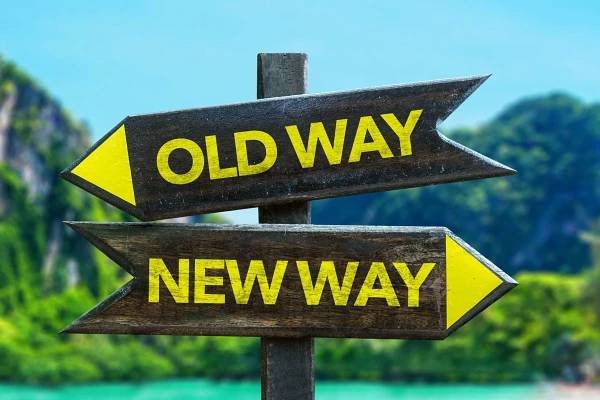 As far as energy is concerned, the REPowerEU program and its rapid implementation will be crucial for the presidency. Prague sees the program as an appropriate instrument for the effective diversification of energy sources, as it addresses issues related to logistics, energy savings, and low-emission and renewable energy sources.

The EU cannot be vitally dependent on countries that directly threaten its security and must therefore break its dependence on Russian gas, oil, and coal. The Czech presidency will focus on EU energy security issues, which are currently more urgent than the energy transition.

The Czech presidency also expressed its readiness to work on the implementation of the gas storage regulations. Priority will be given to stocking up before winter and promoting voluntary joint purchases to increase the EU's bargaining power.

The Czech Republic will also focus on the pressing issue of the social impact of the energy crisis. It will work to put in place an appropriate mix of instruments to reduce the negative social and economic impacts of high energy prices and the energy transition. 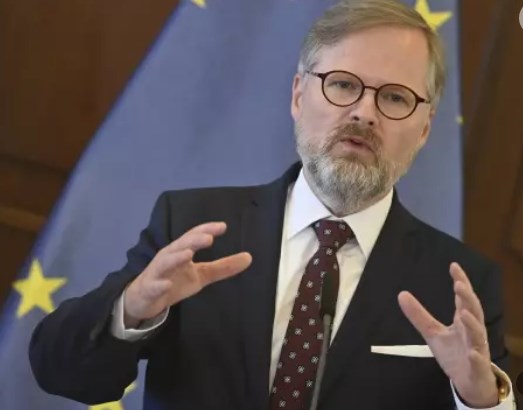 Journalists from influential Brussels and European media are beginning to notice that the Czech prime minister does not exactly make public appearances in the EU, leaving them to guess what to expect from the Czech Republic even during the presidency.

The politician risks that his country's position will be misunderstood, which in turn can affect how the Czech Republic is written about elsewhere in Europe. It is the presidency that highlights all this.

Diplomacy, like EU politics, in which things are rarely said "in full," is a world cup of small hints and signals – and make no mistake –  small or big endorsements. The question is whether Fiala is ready for this.

According to sources, the list of messages from the prime minister's proximity, Fiala's inconspicuousness abroad is supposed to be partly deliberate. Given the difficult economic situation at home, the prime minister and his advisers seem concerned that overemphasizing activities abroad might be more likely to enrage people. However, Czech prime minister Petr Fiala is also known on the European stage for trying to maintain his typical temperance and discipline.

The professor of political science, who was initially tasked mainly to carry out the falling Civic democratic party (ODS) by opposition flights, is waiting in a few days – when he stands alongside the union's "president" Charles Michel at the head of the union – to be transformed into one of the real leaders of the west.

But the presidency of the EU is also a bit of political theatre. The leader of the presidency hosts other political leaders at the summit, does not avoid large press conferences alongside EU leaders at summits where there can be a lot at stake and will be "chased" by journalists from all corners of Europe asking for an interview. 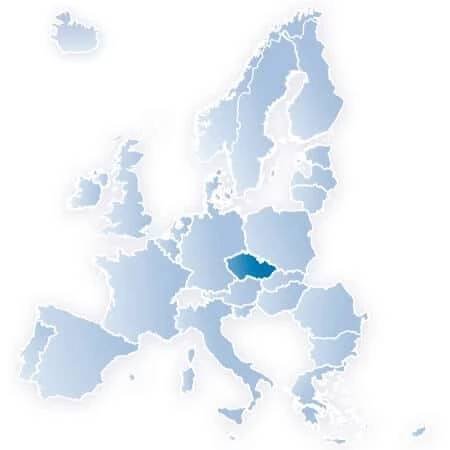 As a professor of political science, prime minister Petr Fiala is a champion of long and many-word phrases. A few days ago, he announced he would give a "speech to the nation" on Czech television.

Some citizens hoped they would finally learn about some crucial decision, how the government intends to help ordinary people in an awkward economic situation. But during the fifteen-minute speech, nothing like that sounded. Even non-alternative, official commentators are very critical of his "fundamental" speech.

It does not have much meaning to have high expectations from the Czech Presidency of the EU. So far, the Czech government does not vigorously and consistently defend its citizens' interests and acts as a part of mainstream Europe. More than half a year when the government has been in power is not such a short time.

In today's rapidly evolving times, however, this government has not yet solved any major problem that the inhabitants suffer from. We will see how it leads the EU.