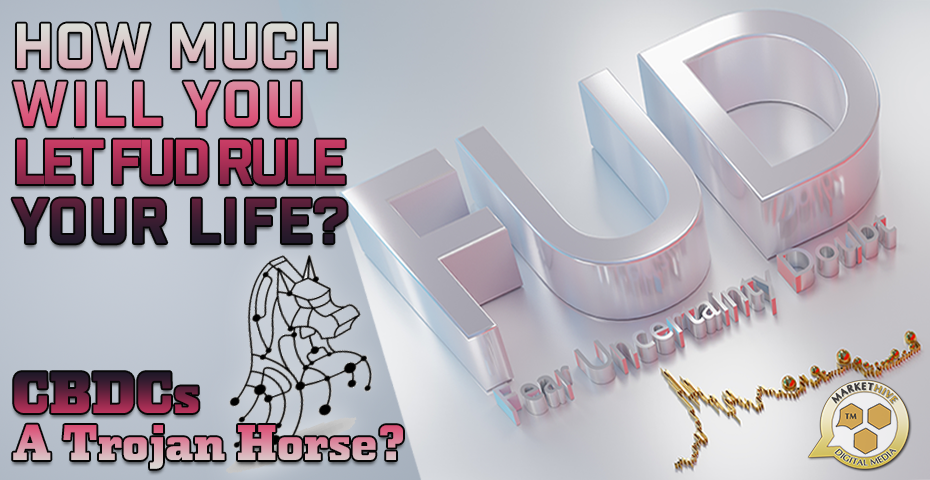 How Much Will You Let FUD Rule Your Life?

CBDCs Disguised As A Gift Of Good Will.

Following on from my last article, and thanks to my fav crypto guy, who opines that the governments are at the gates of Troy with their Trojan Horse and they have got a gift of goodwill for all of us. It's a Central Bank Digital currency that you think will help make your daily spending that much more efficient. However, hidden inside these CBDCs is a financial surveillance mechanism that you cannot comprehend.

This is all particularly relevant now in light of the recent launch of the eYuan CBDC by the Chinese government. This will allow the Chinese government to precisely monitor what its citizens are buying with the currency. They can see where the money is being sent. A “centralized cryptocurrency” is a BINO (Blockchain in Name Only) that could link up to their social credit database.

There is no doubt that the government's end goal is to replace cash with this centralized digital currency. Cash remains the only remaining method by which people can privately spend. Well, that and decentralized cryptocurrency.

For this reason, the Chinese government has decided to take a more rigid stance against cryptocurrency. They know that it allows people to circumvent CBDCs, and it is naturally the first to be placed in the firing line. This ploy was orchestrated and is indicative of the state of privacy in the world right now.

What is even more alarming about this is that the Chinese don't appear to be alone in their quest for CBDC dominance. Sweden has begun trialing several CBDC alternatives for its eKrona. For those who don't know, Sweden is one of the most cashless societies out there.

Indeed, cash use globally has tanked due to the Pandemic, which has given numerous other countries a reason to eventually limit its circulation and move to more centralized payment mechanisms. In the case of Sweden, the eKrona is the next logical step.

The folks at the European Central Bank are also languishing at the prospect of a digital Euro. They are highly interested in the idea and have even published a paper to explain how they envision the Digital Euro to look.

The head of the ECB has also said that they plan to hopefully roll out this digital Euro within the next four years. This is the same ECB head who was simultaneously throwing FUD at Bitcoin a few months ago.

Also, the Bank of England could be looking at launching the UK's equivalent of a CBDC. And, true to form, we also have the comments coming from the governor of the BoE on how dangerous crypto is.

Are you noticing a pattern here?

And, of course, the overlords at the Fed are not sitting on the sidelines either. Jerome Powell has stated that the Fed is advancing work on a dollar-based digital currency. There is apparently pressure from within congress to advance potential digital dollars in the US.

Even in my own backyard here in Australia, the Reserve Bank (RBA) is in an initial research phase, but say we can expect CBDCs will eventually play a key role in the financial services ecosystem.

As mentioned in this Fintech article, there is an increasing interest by Aussies in Bitcoin and other cryptocurrencies incited by the pandemic with heightened use of digital payment systems is putting pressure on central banks to research into CBDCs.

However, let’s be clear, a centralized CBDC will be nothing like the decentralized crypto we know and love, giving us hope for a better economic future including privacy, autonomy, freedom, and self-sovereignty.

“Digital Currency” according to the CBDC definition is very different from “Crypto Currency” which is a virtual currency that uses cryptography to secure and verify transactions as well as manage the creation of new currency units ideally in a decentralized fashion.

There are, of course, many other central banks around the world that are looking into these. They are also collaborating and sharing ideas about how they could implement such technology. You need to look no further than this report by the BIS, which was worked on seven different central banks.

This is further evidence that open-source and decentralized cryptocurrency is vital in today's day and age. Not only is it helping people in economically oppressed nations, but it could also be a saving grace in an increasingly centralized and dystopian world.

From a trading point of view and also fuelled by it, cryptocurrency is volatile. Also, adoption is considered slow, but really, look how long it took for society to accept plastic cards back in the day and they had their fair share of obstacles, security, and interoperability issues.

There are many challenges the crypto industry needs to overcome, but it is happening with the likes of dedicated people in the space. I'll go as far as to say no technology is perfect, but I would far rather use an imperfect technology that I have a hand in shaping and defining than a supposedly perfect one imposed on me by a central bank.

Don’t Be A Victim Of FUD

Another thing that might be on your mind is the news we keep seeing about cryptocurrencies from the media. Sometimes the information is positive, but lately, it's been quite negative. Whether it's China cracking down on crypto, or some "expert" saying that cryptocurrency will crash, there's always something somewhere you can find to feel the FUD (Fear, Uncertainty, Doubt).

When you find yourself obsessing over what the media is saying, ask yourself this: Are the fundamentals still there? More often than not, the answer is yes. Bitcoin has been declared dead over 416 times, and China has banned it a total of 5 times. It's a bit like the "boy who cried wolf" and something to consider when FUD infiltrates your logic.

It's almost like someone is trying to play with your emotions to trick you into selling. There is perhaps some truth to this idea. You can learn about that truth by watching the video below. Something that was around long before crypto.

The Industry Is Much More Than Markets

Instead of thinking outside the box, imagine there is no box. I keep the FUD far away by researching new and existing crypto projects. This is an excellent reminder of what the bigger purpose and value of cryptocurrencies are.

Like the blockchain, crypto projects such as Markethive and Cardano where it's about a brighter future of financial sovereignty and autonomy for humanity. People are waking up and starting to opt-out of the legacy financial system, and centralized social media as they recognize it for what it is. It's a negative to the human race.

Markethive and Cardano are building something better, building unique engines that can process billions of transactions, creating self-sustainable ecosystems in social media, marketing, and decentralized finance.

They have designed a different system for the world that's better than what we have right now and is more inclusive. We have a system where we're all treated equally and fairly and where we have access to opportunity, no matter where we're from because people deserve that.

We need to recognize that this industry is about systems at its core. It's about redesigning how the money in your pocket works and redesigning the way you express yourself and relate to others.

Researching and acquiring this knowledge helps me gain wisdom in all areas of my life. The crypto market ebbs and flows, but the knowledge you will gain from doing research is permanent.