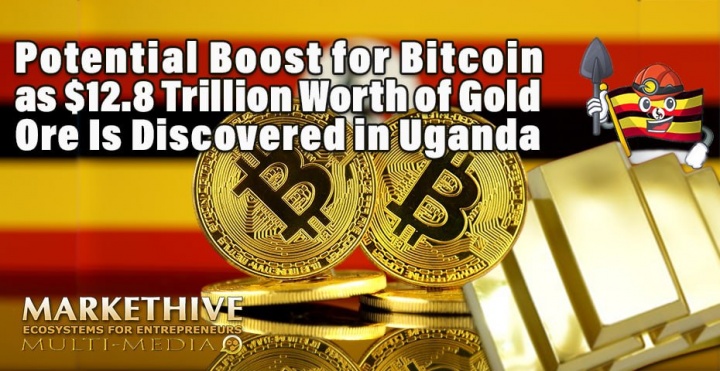 Potential Boost for Bitcoin as $12.8 Trillion Worth of Gold Ore Is Discovered in Uganda 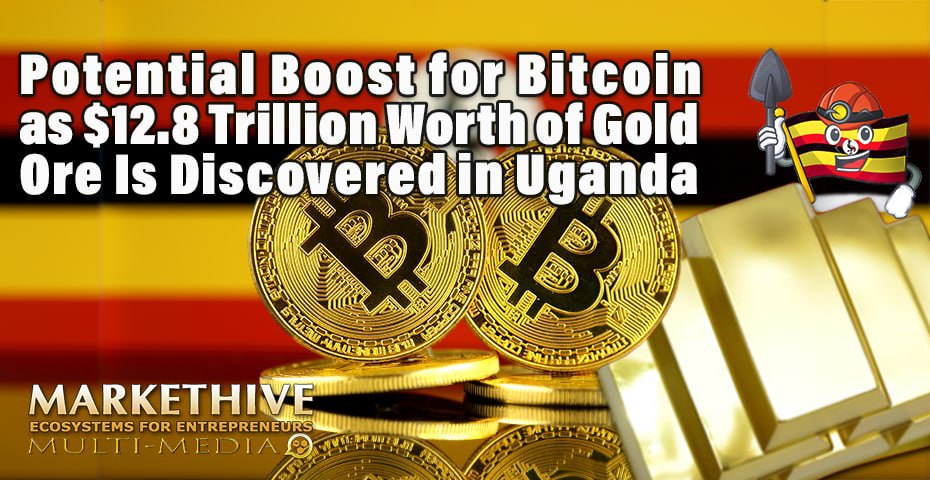 The cryptocurrency markets have been on the downside for most of the year. The recent discovery of gold in Uganda may likely be the miracle to help the market make an upward trace.

KAMPALA (Reuters) – Uganda, has revealed recent exploration surveys to show it has discovered gold ore deposits of about 31 million tonnes with an estimated 320,158 tonnes of refined gold valued at $12.8 trillion. The country wants to attract big investors to develop the sector hitherto dominated by small wildcat miners. Solomon Muyita, a Ugandan Ministry of Energy and Mineral Development spokesperson, made this known.

Most of the gold deposits were found in Karamoja, a scorched sprawling area in the country's northeastern corner on the border with Kenya. Massive reserves were also found in the country's eastern, central, and western regions.

However, the argument on the scarcity of gold which makes it a store of value may be harmed after Uganda announced that it had discovered 31 million metric tonnes of gold waiting to be mined in the area. While gold is often regarded as a scarce asset, the recent development has posed a significant risk to that effect. It may cause panic amongst investors who may be wondering about its potential value shortly.

If Uganda is truthfully sitting on that massive amount of gold ore, as the government acknowledged, will that not substantially boost the world's gold supply? That could significantly lower the price of gold and make it a less secure "store of value." 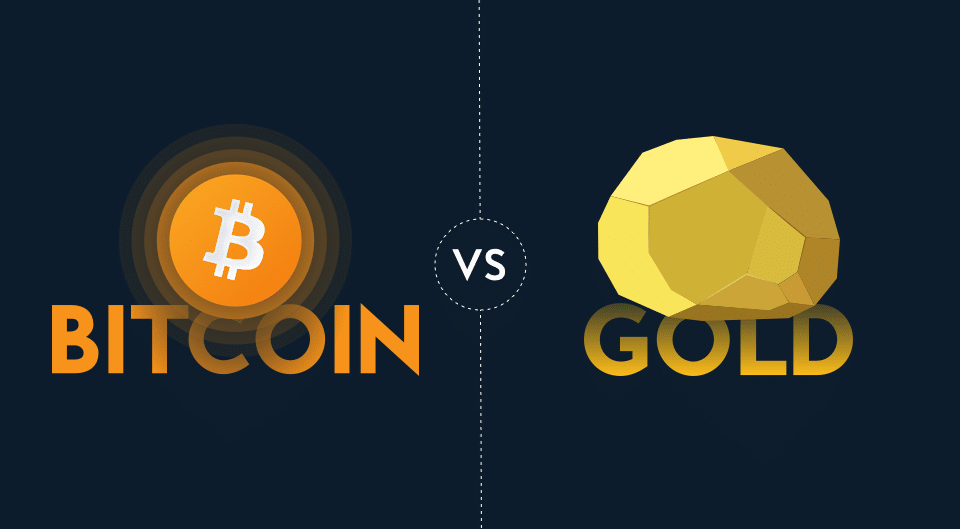 For many years, there has been fierce debate over the supremacy of Bitcoin over Gold. While Bitcoin is primarily praised as a currency, others believe that the coin is also a commodity that could be adopted as a store of value. The main argument for the use of Bitcoin as a store of value is the fact that it will never go bankrupt, and can be used as an investment alternative to gold or other commodities which have fallen in value in recent times because of inflation or recessionary economic conditions respectively. The second factor that propels the adoption of Bitcoin as a store of value is its ability to prevent capital controls and restrictions on banking transactions imposed by central banks due to government intervention in the financial market. For instance, China has banned trading cryptocurrencies such as Bitcoin through domestic exchanges.

Gold historically performs well during market corrections because it maintains its value; its price holds somewhat steady, then tends to rise as investors move from stocks to gold if a recession threatens. This makes it useful as a hedge, an investment that moves opposite another against market corrections or recessions. For example, the stock market may rise as the economy improves, but gold typically declines in value when the economy grows.

Thus, when the stock market falls, and the economy slows down, people will likely turn toward commodities like gold as a haven against inflation and economic weakness. In other words, investors who seek a stable store of value will often buy gold for their money rather than stocks or bonds that can fall in value. The gold's capped supply has helped the discussion that Bitcoin could be used as a store of value, but the recently discovered gold in Uganda may intensify the debate that Bitcoin is better suited. However, Bitcoin mining sites face scrutiny and resistance because of their electricity consumption.

It should, but the point here is that this sort of thing is logical. There is no way Bitcoin could experience a similar expansionary supply shock because of its strict 21 million supply limit. This makes Bitcoin a non-inflationary asset. Even if the Ugandan spokesperson is lying, which he may or may not be, it's only a matter of time before someone discovers gold on earth or an asteroid that massively increases supply. The critical question is, will Bitcoin potentially be a better store of value than gold?

The question is difficult to answer because it's a matter of opinion. Some people think that Bitcoin is more of a store of value than gold, while others believe it's not. Some argue that gold has had more stability because it has been around for thousands of years. The debate has also come to include how secure is bitcoin's blockchain? Is there any way we could hack it? Are we better off trusting a centralized authority than relying on no one? Some even say you shouldn't use it for anything because "it's just an experiment."

Bitcoin is a cryptocurrency that's built on blockchain technology. It was created in 2009 by Satoshi Nakamoto. The cryptocurrency is decentralized and not controlled by any bank or government. The supply of Bitcoin is limited to 21 million coins, and about 19 million are currently in circulation. Bitcoin can be used to purchase goods and services from vendors who accept it as payment. One way to measure the store of value of Bitcoin is to look at the total market capitalization of all Bitcoin in circulation. As of this writing, the total market capitalization was $366,361,873,280.33 on Coinmarketcap.

On the other hand, it is often said that there are no better investments than real estate and commodities, especially precious metals like gold, silver, platinum, and palladium. But historically, gold has been considered a superior investment and a reliable store of value over the centuries throughout the world, especially when currencies have become unstable and their purchasing power is questionable.

Gold is seen as a safe place to put money because there's a scarcity that provides insurance against inflation or deflation as well as providing a handy measure by which we can estimate the price of something. It also provides an alternative to paper currency, which serves as a hedge in times when governments are in turmoil, such as we're seeing now with Greece. But could these advantages still be attributed to gold after the Ugandan discovery? Who knows!

Could the Ugandan Huge Gold Discovery Be a Mere Fool's Gold?

On  April 1, 1988, an Australian fruit agriculturist in the small town of Beenleigh, Queensland, was publicized to have discovered a massive "gold nugget." The farm owner and his family were excited as they thought that they had found Australia's largest gold coin worth thousands of dollars on their land.

However, when it was confirmed that this was not the case, he went into hiding rather than face the media storm that would follow from being involved with what could be considered a hoax. Some people worldwide, including President Ronald Reagan, referred to the discovery as "one of the most incredible things I've ever heard".

Nonetheless, Muyita said a Chinese company named Wagagai had set up a mine in Busia in the eastern part of Uganda and was expected to start production this year. Wagagai had invested $200 million, and its mine will have a refining unit. The Russian government also seems interested to hit the gold mine in Uganda.

The massive gold discovery in Uganda brought mixed feelings among investors. Most people see it as a miracle that could finally make Bitcoin be accepted as a store of value, while others see it as a disaster that may eventually affect the value of gold.

Microstrategies CEO Michael Saylor in an interview with CNBC said:

Garrick Hileman, head of research at Blockchain.com, has this to say during an interview with Cointelegraph:

“The Ugandan find underscores why the approximately 200 million holders of Bitcoin believe that ‘digital gold’ — Bitcoin — is superior to actual gold in terms of its scarcity and reliability as a store of value in the decades to come.”

As was the case with other major gold discoveries in history, like the 19th century South African gold rush, the introduction of this much new gold — or even just growing awareness of the Ugandan find — “could have significant negative price implications for gold over the coming years,” Hileman said.

Bitcoins and other cryptocurrencies are based on the idea that electronic currency is a secure and efficient transaction. The impact of 31 million tonnes of gold ore on the crypto market will affect prices for cryptocurrencies. This is because the volume of gold ore will create more demand for cryptocurrencies, leading to higher prices. This development will be welcomed by many investors who look for ways to invest their money in safe havens.

This impact on prices may be inflationary because it will increase the supply of cryptocurrencies. It is also possible that this will lead to an increase in the use of cryptocurrencies as a mode of payment. This huge find could quickly push inflation down and provide a much-needed boost to global economies.